A royal visit to Leeds Castle: Henry VIII and the Field of Cloth of Gold

On this day in 1520 King Henry VIII stayed at Leeds Castle with Queen Catherine of Aragon and an entourage of 5000 people. This was the best-documented royal visit to Leeds Castle and was a stop off between Greenwich and northern France for a ceremonial meeting with Francis I of France. This meeting became known from its magnificence as the Field of Cloth of Gold and was part of unsuccessful diplomatic attempts by Francis to woo the English away from their alliance with the Holy Roman Emperor Charles V.

Staying at Leeds Castle
King Henry VIII travelled from London to Dover with an entourage of 3,997 people set out from Greenwich Palace on Sunday 21 May, 1520 and reached Leeds Castle on Monday 22nd May on the way to France. Queen Catherine of Aragon, Henry’s first wife, travelled in the same cavalcade accompanied by a personal suite numbering 1,175. Obviously not all of this vast concourse would have found quarters in the Castle, but the King, Cardinal Wolsey and nine other Bishops would have.  The entire upper floor of this part of the Castle was exclusively reserved for the Queen and her closest household staff, indeed the fireplaces decorated with her royal coat-of-arms and the symbols of Castile, a castle and a pomegranate, remain to this day.

At the time, Sir Henry Guildford was the Constable of the Guard at Leeds and as such was responsible for preparing the Castle for the King’s visit. It was his job to ensure food and sleeping places for everyone. He was paid £66-3s-3D (approx. £25,500 in today’s money). And given that the King had already paid some £860 for the necessary repairs and alterations to the Castle, the visit was an expensive undertaking; especially considering the Royal party only stayed for one night before moving on to Dover Castle.

From the castle, they moved to Charing for their next night’s stay.  They reached Canterbury on the 25th of May, from where they moved on to Dover, before proceeding to France on the 31st of May, probably on board the flagship of the fleet, the ‘Henri Grace de Dieu’, or ‘Great Harry’.

Embarkation from Dover
Henry VIII rested in Priory while all the 27 ships were loaded, sailed across to France, unloaded, returned and reloaded. The hulls of the ships were too deep to come right inshore and so, small rowing boats were used to take the people to the ships, and they then had to climb up rope ladders to get on board. Once on board they hung their coats of arms on the side of the ship. This represented the passenger list and was a record of who was on which ship.

A copy of the painting of the “Embarkation from Dover” hangs in the Henry VIII Banqueting Hall at Leeds Castle. Henry VIII commissioned the paintings and in all probability the artist had not even visited Dover. They were pained around 1540, at least 20 years after the event. 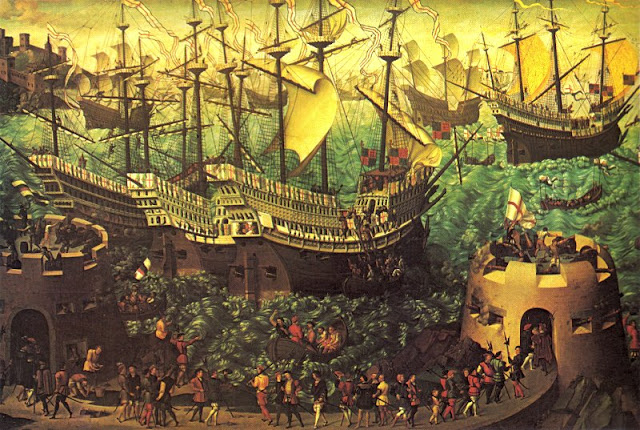 The Field of Cloth of Gold
The kings spent huge amounts of money, wanting to outshine the other. Tents for people to stay in were made of gold cloth and there were wresting competitions, fountains which ran with wine, jousting tournaments, and much feasting and dancing. On the last day there was even a firework display.

They took all of their own food to eat during the 17 day meeting. Royal records show that venison from the Leeds park and butter from the dairies were supplied. We also know from Royal Household accounts that their fish menu included; 9100 plaice, 7836 whiting, 5554 soles, 2800 crayfish, 700 conger eels, 3 porpoises and a dolphin.

The original painting of the Field of Cloth of Gold is in Hampton Court palace.

Do you fancy sleeping under canvas just as Henry VIII’s entourage would have done in 1520? Leeds Castle has launched a new glamping site based on Medieval design to form a ‘village’ on the one-acre castle vineyard.

Leeds Castle
Maidstone, Kent, United Kingdom
Welcome to the Leeds Castle blog. Here you'll find information about our latest events, things going on around the castle and entertaining articles. Set in 500 acres of beautiful parkland, Leeds Castle is the perfect backdrop to your day out. The historic castle, glorious gardens, attractions and programme of events awaits visitors. Bring the whole family to Leeds Castle with your Key to the Castle ticket and journey through 900 years of captivating history. Open all year round, there is something for everyone to enjoy. Visit our website here leeds-castle.com to find out more!